Black German Shepherd female is a breed that is beautiful as well as intelligent. This breed is a beauty with a brain. The myth that its black color is due to a mixed-race defect is incorrect. It has proven over time that the black color is due to the recessive genes found in both parents.

The black German Shepherd Female is gorgeous. Their double coat in inky hues is striking, and those big deep eyes are a treat to watch. Those hazel-colored eyes compliment the dark jacket so well. They have a straighter back as compared to standard German Shepherds.

Their size ranges between 22-24 inches, and they weigh between 50-75 pounds. They are lesser muscular as compared to male Black German Shepherds.

The average age of a female Black German Shepherd is around 9-13 years. But they can live longer if taken care of rightly. To ensure a healthy life for your Black German Shepherd, make sure they have vaccinated, clean, and take a proper diet. Exercise is another factor that keeps them happy and healthy. They need at least 60 minutes of exercise daily.

People who keep female Black German Shepherds don’t have to worry when they have guests around. They will fall in love with anyone who shows love towards them.

Growing up for anyone isn’t easy. It brings its kind of challenges and trials, along with the fun of learning. The same is the case with dogs. Just like children need to go to school to learn and educate themselves, dogs must be trained either at home or at schools established for dogs.

Learning is difficult. It depends on the teachers how easy they make it for their students. Similarly, it depends on the trainers how comfortably they make the dogs learn and how much ease they teach. Training a Black German Shepherd is as important as feeding them.

Female Black German Shepherds are quick learners and easy-going. It doesn’t take much effort to teach them, but the training has to be started at an early age to learn quickly and easily.

Breeding and its importance

A female Black German Shepherd dog reaches puberty as soon as six months of age when she experiences her heat cycle for the first time. She can enter estrus as late as two years of age, as well.

A female Black German Shepherd comes into heat or estrus twice a year, i.e., after every six months. A heat cycle lasts for approximately two to three weeks. Some female dogs experience heavy bleeding during this time, and some expertise minimal bleeding.

Do some owners wonder how to know that the female dog is on the heat cycle? The most common physical indication of the heat cycle is the swollen vulvar. Then come the bleeding and then attraction towards male dogs.

A female Black German Shepherd should be made to reproduce after the age of 13 years. It carries risks of miscarriages or disabilities in the puppies born. Similarly, they should avoid mating before two years as they are not physically and mentally mature enough to give birth. It can cost them their sanity or even their life.

Male vs. female german shepherd/what’s the difference between the two?

If we compare both breeds in personality, then both sexes are groom equally. According to a survey and research male, GSD is more dominant than female black GSD.So not a big difference between the personality of the two sexes. 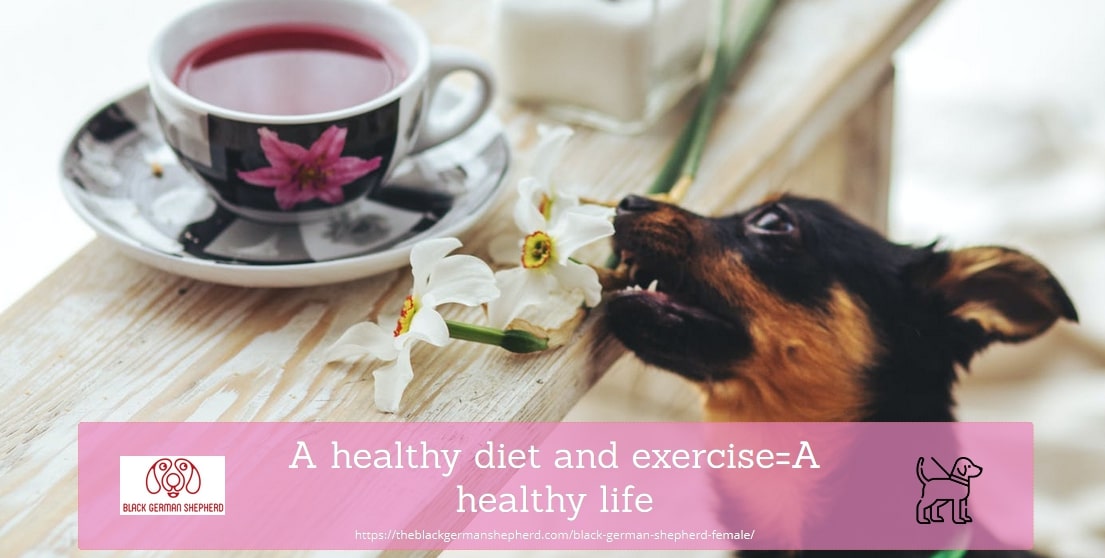 Just like male Black German Shepherd dogs, females also require exercise every day. They need to be adequately fed to ensure their nutritional requirements fulfilled — approximately 1000-1500 calories in a day needed by female Black German Shepherds depending on their size. Their diet should comprise of lesser sugar and more protein and carbohydrates to give them energy and nutrition to grow up.

Their digestive systems are incredibly fragile, so ask your veterinarian about what to give and what to avoid. They should not provide anything lying around; it can cause health issues.

A dog’s training makes it whatever it is. If it is aggressive, then it means the dog has not trained well. The temperament of a dog is a reflection of its training. So prepare your dogs well no matter what gender you select while adopting one.

A female dog is the only species on planet earth that can love you more than yourself. The love of a dog can never doubt because it is the most loyal and obedient species in the world. No matter how low you feel, your dog will cheer you up and be with you through thick and thin. A dog doesn’t judge you as humans do. It loves you despite your looks, financial status, and the fact that you love it back or not.